CEJC will be continuing its series of Regional Conferences throughout the state bringing together CEJC organizations, allies, supporters, and community members to discuss Environmental Justice issues in the local region, network, organize, and plan solutions to our common problems. Please join us! 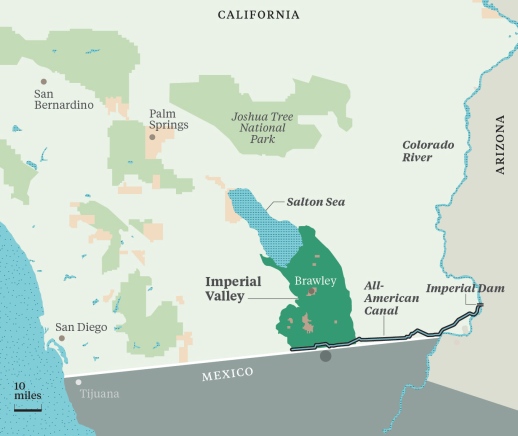 CEJC will hold its third Regional Conference in the Imperial Valley on Saturday, June 24th. Click here to REGISTER and get more info! 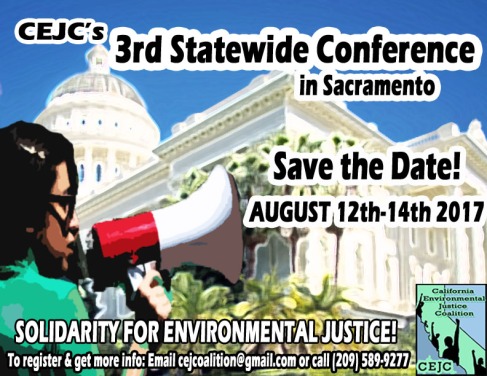 We will also hold our third Statewide All-CEJC Conference in Sacramento from Saturday, August 12th to Monday, August 14th. Click here to REGISTER and get more info!

As a state-wide coalition, CEJC understands the importance of solidarity in the Environmental Justice movement. In order to strengthen our solidarity, CEJC will be hosting a series of regional conferences to explore the common issues and solutions that may exist in their particular area. Members are also welcome to present these issues and potential solutions at an all-CEJC conference in the state’s capital this summer!

In the past year, the oil industry spent 36 million in lobbying alone in California.  This oil money in our political system has allowed the big time polluters to continue legally poisoning our communities and the worsening of the climate crisis. That’s why we are calling on Governor Jerry Brown and our California Legislators to stop taking dirty money from the oil industry. And on May 20th, we will be coming together in Sacramento for the “Oil Money Out, People Power In” March & Rally to demand that our elected leaders stand with the people and prioritize public health over industry profits. To get oil money out, we need to everyone to be involved.

Here are the event details:
WHAT:  Oil Money Out Rally and March

We need your help reaching out to your network, sharing on social media, mobilizing folks to attend the Oil Money Out Rally and March in Sacramento, and getting your organization signed on as a co-sponsor of the Oil Money Out Campaign. Please use the links below to help us spread the word and build our movement!

Once you’ve been able to spread to word about the March & Rally, please add your name to the petition to tell Governor Jerry Brown & California Legislators to stop taking dirty money from the oil industry: http://bit.ly/OilMoneyOutPetition

For more information about the Oil Money Out campaign, please visit: www.OilMoneyOut.com Thank you for all that you do!

San Francisco, CA – Already suffering from pollution and injustice, and alarmed by the Trump Administration’s attacks on environmental protection, health and justice, residents and grassroots groups from urban, rural and Indigenous communities most harmed and at risk from pollution united in a march and rally Friday, April 21st in front of USEPA Region IX in San Francisco. Bay Area residents from Bayview Hunters Point, Richmond, Oakland, San Leandro and Livermore were joined by Mohave Elders of the Colorado River Indian Tribes, Gila River Indian Community members, youth from East Los Angeles, people from farmworker communities in the San Joaquin and Imperial Valleys for today’s protest, communities impacted by fracking and refineries, and many others.

The rally was followed by a march to the Federal Building where the community members most at risk from Trump’s extremist pro-polluter policies. We are demanding:

Trump’s appointing of anti-environmental officials to his Cabinet and environmental agency posts, his dismantling of important regulations that protect public health and the environment, and also his proposed budget cuts would devastate environmental protections for all Americans but especially for the low-income people of color who bear the disproportionate burdens of polluting industries, toxic contamination sites, fossil fuel, climate change, and environmental racism.

On the morning of April 21st , 100 community and environmental justice advocates addressed dozens of USEPA and CalEPA officials and staff about their concerns and demands for health and justice. 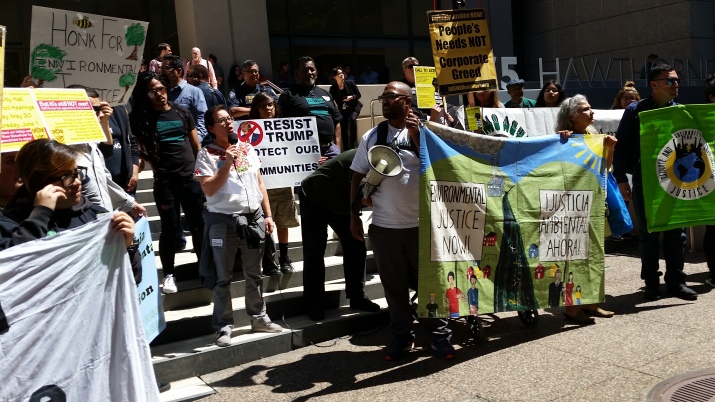 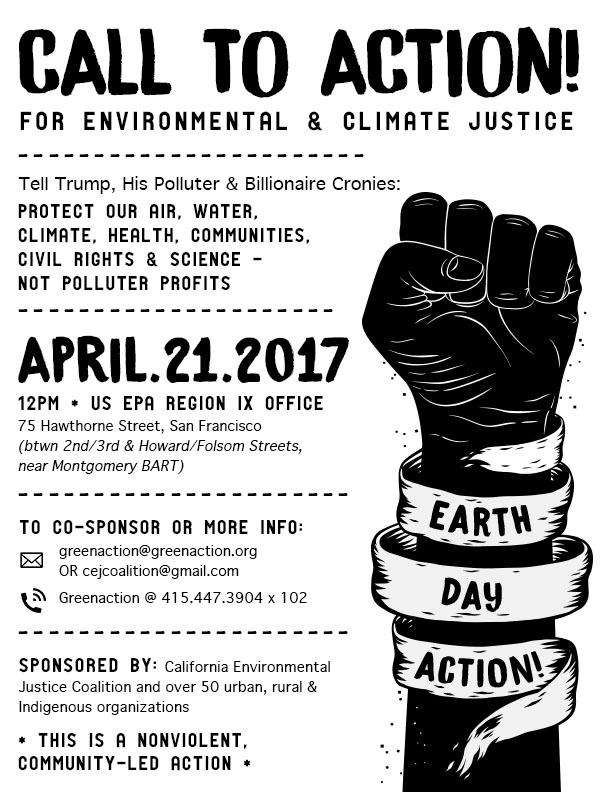 As a state-wide coalition, CEJC understands the importance of solidarity in the Environmental Justice movement. In order to strengthen our solidarity, CEJC will be hosting a series of regional conferences to explore the common issues and solutions that may exist in their particular area. Members are also welcome to present these issues and potential solutions at an all-CEJC conference in the state’s capital this summer!

Please click the links below to REGISTER for any of the conferences you would like to attend! More information will be posted as it becomes available.

Support for this project has been provided by: 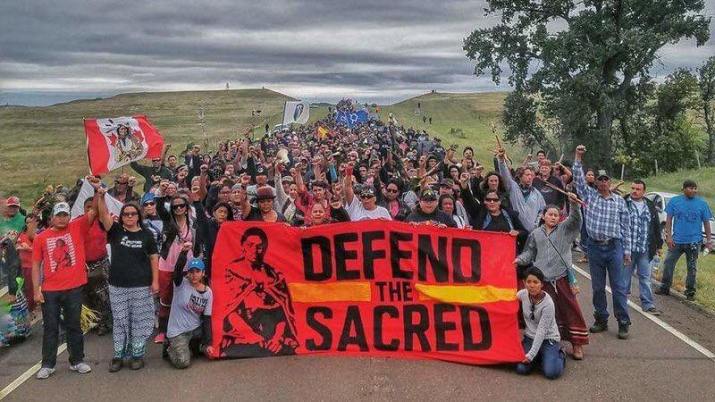 We the undersigned environmental justice, social justice and indigenous organizations stand in solidarity with the Indigenous People and Native Nations peacefully defending sacred cultural resources, land and water from the Dakota Access crude oil pipeline that would carry fracked oil from the Bakken oil fields.

We fully support the thousands of Indigenous Peoples who are taking action to peacefully block construction of the Dakota Access crude oil pipeline in North Dakota that would run under the Missouri River and destroy sacred cultural resources.  Families with children, women and elders of the Standing Rock Sioux Tribe, other Native Nations and allies are armed with banners, song and prayers and are camped along the Missouri and Cannonball rivers. They remain undaunted in their vigilance to protect and defend the sacredness of water, burial and significant cultural sites, and sensitive wildlife habitat in immediate danger from the pipeline being built by Dakota Access LLC/Energy Transfer Partners.

The Army Corp of Engineers, as the federal regulator, gave US government approval of the proposed 1,172 mile long pipeline to cross the Missouri River and other waterways that threatens the Standing Rock Sioux Tribes’ drinking water and cultural resources. The pipeline will violate treaty law, the Clean Water Act, the National Environmental Policy Act, the National Historic Preservation Act, and the Native American Graves Protection and Repatriation Act.

We therefore call on the State of North Dakota and the United States government to cease all harassment and interference with the protest and ceremonies taking place. We call on you to cancel this dangerous and reckless project immediately.

In solidarity for justice,

CEJC and Greenaction for Health and Environmental Justice are proud of our work mobilizing support for California Assembly Bill 1787 that was just signed into law by Governor Brown. We appreciate Assemblymember Jimmy Gomez for sponsoring the legislation, and thank all the community and environmental justice organizations that joined in support of the campaign to get the bill passed and signed into law.

This bill was inspired by the outrage and challenges to the racially discriminatory permit process used by Kings County in the Kettleman City toxic dump permit process where Spanish speakers were given only half the time to testify as English speakers. At the infamous Kings County hearing, US citizen Ramon Mares who is a monolingual Spanish speaker (and co-founder of both El Pueblo of Kettleman City and Greenaction) was dragged out of the hearing by 8 police officers for the “crime” of demanding equal time to testify as English speakers.

We will continue fighting to end all racial discrimination in federal, state and local environmental decision making (and everywhere). We will now escalate our efforts to stop government agencies from using English-only environmental review documents in communities where there is a large percentage of Spanish speakers.

SACRAMENTO, CA – Scores of environmental justice and community leaders from 56 organizations will be in Sacramento, California from August 20 through August 22 to educate the California Legislature and State Environmental Agencies about the need to massively reform state laws and practices that favor corporate and government polluters over the health and safety of communities.

While in the capital, members of the California Environmental Justice Coalition (CEJC) will hold a weekend conference to share information, strategies and best practices for winning toxic cleanup, environmental and cultural preservation, community resilience and other shared CEJC goals.

“Environmental justice policy in California is in crisis,” explained CEJC Coordinator Thomas Helme. “We are converging in Sacramento united in our urgent demand for a comprehensive plan to repair the vast disparities in environmental health and justice felt by the most exposed and vulnerable people in our state’s urban, rural, and indigenous communities.”

CEJC member groups will also take special note of recent environmental justice victories, such as the federal civil rights settlement reached with state regulators, and setbacks, including deficient hazardous waste permits issued for facilities up and down the state.

Marylia Kelley, of Tri-Valley CAREs in Livermore, will highlight her group’s challenge of a “shockingly lax permit” issued by the Department of Toxic Substances Control (DTSC) for a nuclear weapons lab on EPA’s Superfund list. And, Maricela Mares-Alatorre, with El Pueblo/People for Clean Air & Water of Kettleman City will lead a workshop for CEJC on the historic civil rights settlement reached this month by her group and Greenaction. Mares-Alatorre said, “My goal is to help every community use this victory so that their members can participate in DTSC public processes at a more meaningful and equitable level.”

Culminating the activists’ “2016 Days of Action” will be meetings with many of California’s top lawmakers and key agencies, including CalEPA, DTSC, and the Air Resources Board, on Monday, August 22. “Policy makers and regulators listen to the grassroots leaders on the frontlines of pollution and injustice because no one knows better what is really going on in our communities. CEJC member groups are amazing ‘watchdogs’ with unmatched on-the-ground expertise,” noted Bradley Angel of Greenaction for Health and Environmental Justice.

The California Environmental Justice Coalition was founded in November of 2014 in Kettleman City. The “2016 Days of Action” will mark the coalition’s second statewide gathering. Led by people of color and low-income communities, CEJC is a broad, inclusive, grassroots statewide coalition of small and large groups uniting urban, rural and indigenous communities in resistance against environmental racism and injustice, and committed to environmental, social, and economic justice. CEJC welcomes longstanding environmental justice organizations and newcomers alike.

MEDIA OPPORTUNITIES:  The media are welcome to observe proceedings and interview CEJC community leaders during the CEJCSunday morning conference session, August 21, 2016, at the Capitol Event Center, 1020 11th Street, in Sacramento from 9:45 AM to 11 AM. Media are also invited to attend the CEJC briefing with top environmental agency officials on Monday, August 22, 2016, at the Coastal Hearing Room on the 2nd floor of the Cal/EPA building at 1001 I Street in Sacramento from 11 AM-12:30 PM. Interviews with individual CEJC organizations in advance is encouraged. 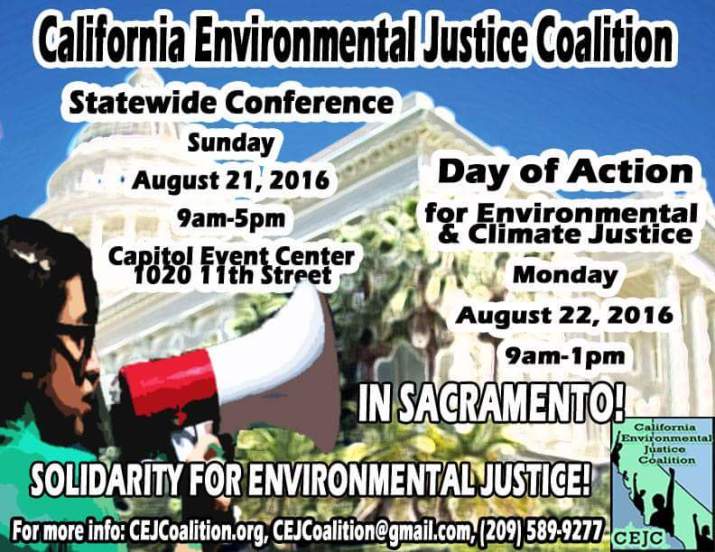 -To Register, please either download the form and then submit the completed form by email to CEJCoalition@gmail.com or complete the Survey and press ‘Submit.’ Thank You. (Some limited travel scholarships are available to help with the expenses of grassroots community and environmental justice groups who are CEJC members, or other groups who may qualify, on a first come first serve basis.)